Why Wix’s response to WordPress re GPL license is weak 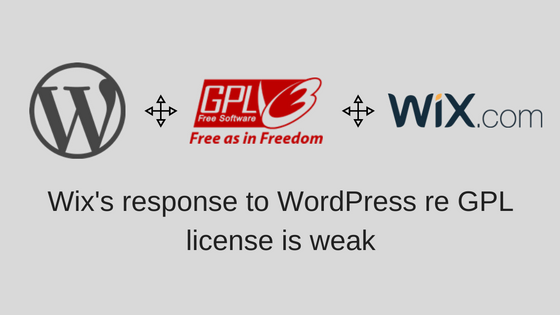 Over the weekend, WordPress co-creator Matt Mullenweg called out Wix for using some of WordPress’ Open Source, GPL-licensed code in an improper fashion in their new mobile app; and also for ripping off the WordPress brand by calling Wix “WixPress.”

Wix should have provided GPL attribution

Matt said Wix should have provided proper attribution to WordPress for the code used in the mobile app. Abrahami does not address this. Yes, Wix has released over 200 Open Source projects on Github, but doing a good thing doesn’t reconcile doing a not-good thing. If the license says they need to provide attribution, they should address that specific issue for this specific piece of software.

Matt states that if a piece of software includes any components from other GPL software, that makes the whole new piece of software GPL and it should therefore be made public if distributed (which the mobile app was). This is indeed the case, and it is not addressed in Abrahami’s response. Releasing partial components on Github is not enough.

Wix WAS called Wixpress in the past

Matt refers to Wix having ripped off WordPress’ brand by calling themselves Wixpress. I did a quick Google search for “Wixpress Ltd.” and lo and behold, Wix started out as Wixpress. Press releases were filed under the Wixpress name, and the official company name listed in the filing on  the stock exchange is Wixpress Ltd. It is noted in the document that they changed their business name in the US (and after checking the Israeli business registry, it was also changed here), and are now called Wix.com Ltd. Their Brazilian subsidiary is still referred to as Wixpress in the filing. None of us know them as Wixpress, so they seem to have smartly shifted away from that brand early on. In fact, while they initially filed for a trademark for this name, they abandoned it in 2010 which indicates they weren’t invested in that name. But the bottom line is, Wixpress is part of their legacy. Why did Abrahami deny that when we all know how to use Google? A more straightforward response would have been “Yeah, in the beginning we made a mistake with our brand, and if you ask anyone what Wixpress is, they probably won’t know since we abandoned that early on in favor of Wix.com”

The tone of Wix’s response is…unsettling

There’s something about Abrahami’s tone in his email that irks me.

Maybe it’s how he calls Matt “dude” and says “I didn’t know we were fighting”. You’re not fighting so don’t make it into a fight: Matt wants you to do what he thinks is right.

Maybe it’s how he tries to deflect accusations of brand-stealing by saying that WordPress has shifted from being only about blogs to being about websites too – I mean, what? Is he saying that Wix has sole ownership of the website-building space and Automattic stole that from them? A company is allowed to expand its focus for goodness sake.

Maybe it’s how he invites Matt to coffee, which is a poor reading of a serious situation. If you think someone ripped off your stuff, you may not feel like getting together with them for coffee…probably more like a court of law.

Also, why didn’t he link to Matt’s original post?! That’s a rhetorical question, but it looks shady. I think it would have been better for the company to have publicized the response by the engineer responsible for the mobile app that Abrahami links to in his post. It addresses the issues in a less…um…passive-aggressive dude-filled way and he shows how he tried to collaborate and share with Automattic’s engineering team. It still doesn’t provide satisfactory answers to the issues at hand, but it’s easier to digest.

Bottom line: lessons to be learned

Look, Matt’s approach to GPL can come across as zealous. And the GPL has never been tried in an American court of law, so it’s not clear that Matt is right about everything in this case (or other cases). And it’s also possible that Wix made an innocent mistake. Open Source licensing can be confusing and unclear. I’m sure there’s a way to resolve this quickly and painlessly. In the future though, all hi-tech companies should strive to increase awareness of what Open Source means, have decent legal counsel, and a good PR team that reacts thoughtfully to branding and legal crises.

Miriam is the friendly CEO of illuminea, a WordPress design and development agency, and Strattic, a static publishing platform for Open Source CMSs. Miriam is a huge fan of WordPress and has been using it for over ten years. In addition, Miriam has organized the past five local Israeli WordCamp conferences.

Our love for Gravity Forms(aff) continues. Yes it costs money. And yes, its worth it. This time it's because of…Continue...