Yedda is an Israeli start up with a web-based questions and answer service that is generally agreed to rival that of Yahoo Answers. Yedda’s technology powers many independent Q&A services as well, including ePals and TheJobNetwork (via TechCrunch). In early November, Yedda was acquired by AOL for an undisclosed amount, making it the second Israeli company to be acquired by AOL in a matter of weeks (the first one was Quigo.)

I first met Lior Haner, the head of Yedda’s Community Marketing, at WordCamp Israel in October. He contacted me recently to tell me about Yedda’s new Feedflare modules that allow bloggers to add a specific Yedda FeedFlare to their feeds that allow readers to ask questions about specific blog posts. 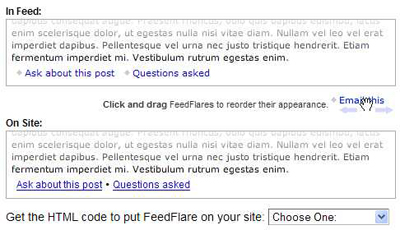 (Image from the Yedda blog)

The idea sounded interesting, but I had some reservations about something that would move discussion about a blog post to another site, since bloggers are notoriously protective of any activity or traffic taking place around their blog’s content.

So I asked Lior if I could interview him about the FeedFlare modules to try to get a better picture, and to give you, my readers, a chance to respond and tell us what you think. He kindly agreed, so here it is:

WPG: Hi Lior! Thanks for agreeing to do an email interview about Yedda’s new Feedflare modules.

Lior: It’s a pleasure, I really believe that blogging is the best way to get information out and create a useful discussion.

WPG: First, can you tell our readers a little bit about Yedda?

Lior: Yedda is a place for people to find answers to their questions. Before the internet age, people with questions first tried to seek out the most qualified person in the question’s topic in order to get an answer. On Yedda, anyone can post a question and tell the story behind it and include any relevant links, images or videos. Then, we match that question with people who have the relevant knowledge out of the Yedda community and invite them to answer that question. This basically creates people-powered search that helps you get better results that aren’t available or difficult to achieve on search engines.

In contrast to most other Q&A sites, Yedda is a platform that can be accessed from Yedda.com, from blogs using Yedda blog widgets, FeedFlare or from Yedda partner sites.

WPG: Can you tell us about the FeedFlare modules, what they do and how they can benefit bloggers?

Lior: FeedFlare is a product by Feedburner, who many bloggers use to keep track of their blog’s stats. FeedFlares are little links at the end of your posts that are visible in your RSS feed and can also be added to your blog’s template. In your feed you have FeedFlare elements that let your readers E-mail, save to Delicious, etc. Yedda has created a custom FeedFlare element that lets readers ask a question on Yedda about your post. The question includes a prominent link to your blog and can attract new readers from the Yedda community. Here is some more information on Yedda’s blog: http://blog.yedda.com/?p=130

WPG: How does it solve the problem of bloggers wanting conversations to take place on their blog?

Lior: Although the questions are asked on Yedda, they include a prominent link back to your blog that both attracts new readers and is good for SEO. If you interact with your readers on Yedda and add your blog’s URL to your Yedda profile, you can create your own knowledge community and promote yourself on Yedda’s network. Using Yedda’s widgets you can create more interaction between Yedda and your blog and span the conversation over both venues.

WPG: Is Yedda widely used, i.e. is there a benefit to bloggers to gain exposure on the Yedda site? Can you give us some statistics?

Lior: Yedda has a growing community of askers and answerers and is currently one of the world’s leading Q&A sites. At the end of 2007 AOL announced it had acquired Yedda and that Yedda’s offering will be gradually added to many AOL sites. Yedda’s approach is that you can ask or answer from anywhere and you will be visible from anywhere. This means that links to your blog on Yedda have a potential of reaching millions of AOL users in your topics of interest.

WPG: Have people started to use the FeedFlares, and if so, how is the response? Do people actually click on them?

Lior: Yedda FeedFlares are a new offering but we have received some great feedback. People use both the FeedFlares and the widgets, and blog owners have reported an increase in the exposure they get from Yedda.

WPG: Can you tell me about some of the other widgets you offer to bloggers?

Lior: Here is an introduction to Yedda widgets: http://yedda.com/blogger. Yedda widgets let your readers ask questions, view relevant Q&A about the topics of your blogs and see what answers you gave in your topics of knowledge.

WPG: As you mentioned, Yedda was recently acquired by AOL. Is this going to affect the blogger services you provide, and if so, how?

Lior: The most dramatic effect will be that Yedda will continue growing quickly. The fact that many new people will join Yedda or be exposed to Yedda’s Q&A in AOL and other sites means more exposure for blogs or people promoting knowledge topics on Yedda. We also plan to continue developing our blogger offering and launching great new products.

Lior: I also wanted to mention that Yedda supplies content sites and publishers with a full-fledged customizable Q&A platform. The Yedda platform is currently integrated into AOL sites and is already up and running in many partner sites (Here are some examples: http://www.epals.com, http://articlesbase.com, http://www.filesrating.com). Here is some more information about Yedda’s partner program: http://yedda.com/partners.

If you want to inquire about Yedda’s offering, I’ll be happy to help: lior.haner@yedda.com.

So what do you think? Do you think that Yedda’s FeedFlares will catch on?