Blogvault: backups that actually work and how to de-clutter your server

A while back, we reviewed three systems for managing multiple WordPress sites – InfiniteWP, ManageWP, and WPRemote. These management platforms include features such as plugin upgrades, spam comment removal, backups, and more.

In the end, we decided on InfiniteWP and were pretty happy with it for a while – really friendly support, new and useful features, constantly improving, etc.

However, we noticed two major issues related to IWP:

1. Some of our hosting clients couldn’t upload images to their site because their disk space was full. I logged into one of our client’s cPanel to see what was taking up the most amount of space, but it’s hard to extract that data easily.  I would later find out that IWP itself was the culprit. 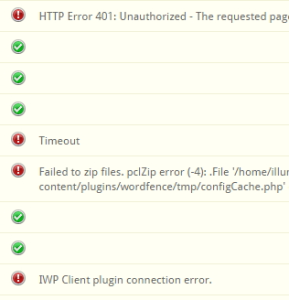 As we soon discovered, these two issues were linked.

The problem: When an IWP backup didn’t work, it stored the half-baked backup in the /temp folder. As the failed backups started to grow in the /temp folder, it started using up more and more disk space on the server, resulting in our clients not being able to upload images to their site. We contacted IWP about the temporary files issue and they said they are working on it. But in the meantime, we needed an alternative solution.

Discovering the problem: We may not have discovered the problematic /temp folder if it weren’t for (drumroll, please)… blogVault, an online backup service.

blogVault to the rescue

After we realized backups weren’t working, we decided to try out blogVault (aff).  blogVault offers real-time backups, meaning it only backs up the incremental changes on your site. And the backups are super fast! No crashing half-way through, no errors, no monkey business, just backups that actually work.

Multisite friendly
Another good thing about the blogVault plugin is that it works with the “Network Activate” functionality in WordPress Multisite. Other plugins, like the IWP plugin, needs to be activated on a per-site basis within Multisite, which gets annoying when you have lots of sub-sites.

Test Restore
One of the most jaw-dropping features in blogVault is the ability to test out a backup before restoring it. Backups are like black boxes – who knows what’s exactly in each one. With this feature, blogVault basically sets up a test site for you to view and review, and once you’ve confirmed it’s what you need, you can restore it one click. Wowsers.

De-cluttering your server
I also love that blogVault shows you which files are NOT being backed up because they’re superfluous. In other words, it’s the holy grail of finding out which files are unnecessarily clogging up your server!

Look how much room we can free up!

And here’s a sample of some of the skipped files generated from blogVault that can be removed from the server such as error logs (who knew they got so massive?!), temp files, and more:

I love a great many things about blogVault, but here are my five cents for how it could be improved:

Rebecca Markowitz has built over 100 WordPress sites for clients as Web Project Manager and WordPress specialist at illuminea. illuminea is a Jerusalem-based boutique web agency. WPGarage shows my dedicated relationship with WordPress over the years - full of love, laughs, tears, growth and strong drinks. L'chaim!

As you know, we love dem Gravity Forms. One of our clients set up a new form on their site…Continue...